After some weeks’ hiatus, Quanta for Breakfast is back! Today I want to give my thoughts on the Fault-Tolerant Quantum Technologies Workshop that I attended this summer in Benasque, Spain. It was my first time visiting the beautiful town and both the location and the workshop definitely lived up to my expectations. 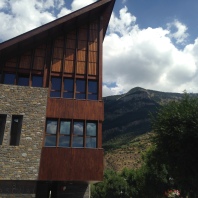 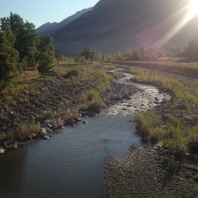 The conference took place at the Centro de Ciencias de Benasque Pedro Pascual, a facility for hosting workshops and scientific meetings and truly a dream come true for physicists at a conference. There were blackboards everywhere: conference theatre, meeting rooms, corridors, outside blinds… It has all the facilities needed to be a place of scientific work and discussion and there is really no excuse to not talk about physics all day long. The building itself had a very interesting design and was built with sustainability in mind. The Centre was named in honour of the Spanish physicist Pedro Pascual, whose Quantum Mechanics book, co-authored with Alberto Galindo, I thoroughly studied as an undergrad at the Universidad Complutense de Madrid. Benasque itself is charming, full of hikers, incredible scenery and good food. There were some complaints about the time it took to have lunch, but what can I say, it’s a holiday town in Spain, restaurants assume the diners want to relax and enjoy the food 🙂 . However, for the people who couldn’t wait to go back to the blackboards, there was always the option of grabbing some tapas.

The meeting was really fantastic, from the content of the talks to the atmosphere throughout the two weeks. On top of the welcome drinks and conference dinner, there were some great activities organised, such as a couple of group hikes, an ascent to Aneto (the tallest peak in the Pyrenees), canyoning and an AMA Reddit session.

On top of all these activities, there was plenty of free time for work and discussion, which is mostly missing in other conferences. This free time combined with the group discussions truly gave us the opportunity to learn new concepts and work together. Speaking for myself, not being an expert in Quantum Error Correction, I came back from the conference having a much better understanding of many concepts, in particular around the concept of cellular automata decoders, which featured in several talks (including a video demonstration by Barbara Terhal, shown in the GIF below). The concept of algorithms using cellular automata in quantum information processes is very powerful, particularly when considering cluster state computations or topological error correction, where the information is stored in global degrees of freedom and can be acted upon with local operations.

The biggest highlight of this workshop was, for me, the extensive discussion around experiments. There were several talks dedicated to the topic:

– Hector Bombin: On the effect of correlated noise

– James Wooton: A decoding algorithm for proof of principle experiments

– Yours truly: Fault-tolerant considerations when designing a linear-optical quantum computer

Also, there were some technical discussions on experimental implementations of quantum computers, as well as which codes should be the first to be implemented  in small scale experiments.

We are currently at a very exciting point in the development of quantum computers. Experiments are starting to get large enough that some small codes can be tested on them. Proofs of principle experiments of topological codes have been implemented with superconducting qubits, as well as with photons and ion traps. However, the community is not in agreement on which codes are the most useful and what scope we have to find yet better error correction codes. On top of that, it might be the case that the different constraints of the various physical systems make it impossible for a single code to be optimal for all. Good news is that, now that the Quantum Error Correction and experimental communities are engaging so much with each other, we can expect vast improvements on the performance of small quantum computers thanks to codes tailored to the specific requirements of the physical systems.

Finally, I would like to thank the organisers – Dan Browne, Earl Campbell and Michael Kastoryano – for such a fantastic experience, I look forward to future editions of the workshop!

I don’t want to leave the post without mentioning the game Decodoku, a browser and mobile citizen-science game based on Quantum Error Correction, which was advertised at the conference. It’s presented as a series of puzzles, reminiscent of the popular sudoku, 2048 and Threes, but in which the problems solved mimic the effects of noise on a topological code. Good strategies for solving these puzzles efficiently could potentially become new decoding algorithms, it gives an excellent excuse for the time spent playing 😀 . If you find out you are really good at it, let the developer (James Wooton) know.